New envoy to Bosnia and Herzegovina: “I bet on the younger generation” | News and current affairs in Germany and around the world | DW

DW: On August 1, you take up your post as the new International High Representative for Bosnia and Herzegovina in Sarajevo, when the country is perhaps facing its worst crisis. Young people are leaving, there is political unrest and the office has been weakened by your predecessors in recent years. What will you do to counter this?

Christian Schmidt: I think three points need to be clarified. I want to warn people that I am coming as a politician, not as a diplomat. This means that some of the things I say may not be quite diplomatically perfect, but they will clearly express what I expect.

First, we must clarify that the idea pursued in recent years that the transfer of territories could be a solution or could calm potential conflicts in the Western Balkans is not viable. You never exchange one minority for another minority. This is why the territorial integrity of the Western Balkan States is essential.

The second question is: how can the functioning of the state be improved in a country as large as (the German state of) Lower Saxony, which has fewer inhabitants than Berlin, but has 137 ministries? How to achieve better governance? Where do you need to streamline and simplify?

And the third point is that the figures I have so far show that 70% of young people in Bosnia and Herzegovina prefer to go elsewhere to secure their future. It’s not good. All of us together, the EU, the High Representative, must focus on the younger generation. Relying only on grizzled leaders will not be enough. I bet on the young generation!

Your debut in Bosnia and Herzegovina is complicated by the fact that Russia has questioned the legitimacy of your appointment. Milorad Dodik from the Serb-dominated Republika Srpska is also reluctant to cooperate, at least for now. How do you plan to deal with this resistance so that your office is not doomed immediately?

The recent decision of the United Nations Security Council (Russia failed on July 23 at the UN Security Council with a motion against the office of the HR – Editor’s note) means a strengthening of the position of the office of the High Representative and of his powers. . This gives me a good basis to implement my understanding of the role of HR after taking up my job, based on the skills that the international community has given me.

But I will never play the role of being there for someone’s sake. I have to be there for everyone equally. This also applies to the Serbs. The Serbs, too, had to endure and meet terrible fates in this region. And that is why some issues should not be seen unilaterally. I have to take care of all issues and all ethnic groups. This does not only concern Croats, Bosnians or Serbs, but also, for example, Jews or those of other faiths. And that is why calm must prevail among all groups.

A major topic is, of course, genocide, and another hot topic is the genocide denial law pushed by the outgoing High Representative, Valentin Inzko. This is a problem that we know, especially in Germany, where we have found a clear solution for it. What is your position on this?

If I read the European Union directive correctly, the European Union is calling for precisely such legislation, which is ethnically neutral. It is not a question of whether someone was Croatian or Serbian, but whether he did something guilty. This is a question that is raised several times on the way to the European Union and not only by the High Representative. It cannot be simply written off. So let’s see where it goes. I am only concerned about one thing: if you think you can change society with such a law alone, you are doing it wrong. You have to approach it much more in terms of information, also in terms of examining ethnic narratives. And there I see an ally in the work of the younger generation, which is currently indoctrinated, partly in an unacceptable way. 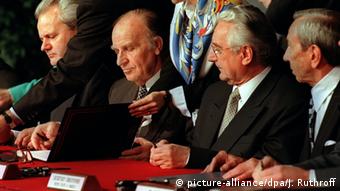 You are the second German high representative. Does this plead in favor of increased German involvement in Bosnia and Herzegovina? Do you plan to provide more German support and German engagement in the region?

Absoutely! It will not be just me – I will come with a certain team and with experts from our country as well. I think the German government will also be more involved. This can be seen as having some political connection to the “Berlin Process” (an initiative to intensify regional cooperation in the Western Balkans). Chancellor Angela Merkel, who recruited me for this office, has a clear vision that we must help the region to progress through concrete measures, be it European regional economic cooperation or otherwise. And the signal should be that we are here, we support you! We see the same responsibility for you, dear Europeans, that you see for us.

Allow me to take this opportunity to say that I found it extraordinarily noble and respectable that the government of the Federation (the entity of Bosnia and Herzegovina, which is populated by a majority of Bosnians and Croats – Editor’s note) offered to Germany for its support in dealing with the catastrophic consequences of the floods. We do not want to have a paternalistic relationship, but rather a relationship between equal partners. This is what the Germans are known for. And I am very grateful to the Chancellor and I hope the Berlin process continues, because there is still work to be done! 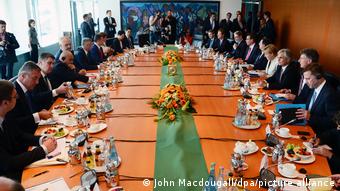 When you look back at the end of your term, what would you like to have accomplished?

I want the brain drain to stop, so that well-educated young people see an opportunity, not only from a financial point of view, but also in terms of quality of life, to thrive here. I would like ethnic diversity, which is sometimes seen as a disadvantage in Bosnia and Herzegovina, to become an advantage here. And I would like to see the country progress economically, scientifically and culturally.

I would be happy if we could contribute a little bit to that so that we can say that ownership is now understood and acted that way. And, not that property for some means lining their pockets, but rather the interests of the state and citizens. It would indeed please me.

The Office of the High Representative (OHR) is an international entity that oversees the implementation of the Dayton Accords, which ended the war in Bosnia and Herzegovina in 1995. Christian Schmidt, member of the Christian Social Union (CSU ), the former Minister of Agriculture (2014-2018) and member of the German Bundestag since 1990, is the second German politician to hold this post. Christian Schwarz-Schilling of the Christian Democratic Union (CDU) previously served from 2006-2007.

This interview has been translated from German.